Imagine you’re standing at the Castleshaw Forts site, way before the Romans came to Britain, in fact in the Bronze Age (c.2500 BC to c.700 BC).  You might be surprised to find yourself in the middle of a Beaker period settlement!  And we can say this because in the 1964 excavations a pit was found underneath the fort…. it was 21″ in diameter, cut into the bedrock to 15″ depth…and containing 122 Beaker pottery sherds, assessed as dating to c.1550BC. The sherds made 5 vessels in partial reconstruction, including one of giant proportions.

I’ll put some references at the end in case you want them, but here’s a picture of our replica Beaker pots – being expertly investigated by Sonia, Jacqui and Paul.

Another interesting piece of information from prehistory is hiding in the Roman name for Castleshaw – ‘Rigodonum‘.   It’s Celtic in origin – translated as ‘king’s fort’ or ‘royal fort’ although no one has discovered which Celtic royal it refers to.  All agree that it cannot apply to the Roman fort itself, but we do know that the Romans quite commonly took Iron Age settlements for their own requirements, usually because they were so well-situated. So was there an Iron Age Royal Residence under our Fort?  When we dig it, then we’ll know!!   And until we do here’s some images to keep you going. You never know.

Now it’s AD 79.  Agricola is in charge in Britain under the rule of the Flavian Emperor Titus. The road going North East from Deva (Chester) to Eboracum (York) clearly has to go over the Pennines and through the territory of the Brigantes.  In this year a fort is built on the road at the Castleshaw site and named Rigodonum.  It’s 9-10 miles from Manchester according to Percival 1752, but a bit longer than that in today’s measuring, but it’s clear that it would make a normal day’s march for troops before they hit the wilder moorland. It’s possible the fort was built to mount offensives against a Brigantes stronghold nearby as some say, or perhaps more likely to guard the main highway and act as a stopping-off point.

It was built of turf and timber and covered 1.2 hectares…. but whatever its purpose it was short-lived and was abandoned c.95 AD.  Then, ten years later in c.105 AD and under the rule of the Emperor Trajan, the site was reoccupied when a smaller fortlet was built, one third of the size of the first fort.  Here’s a plan of the two forts together. 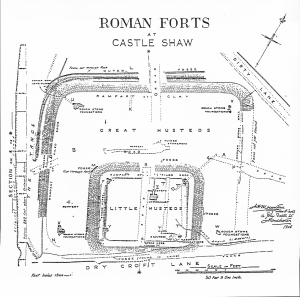 The new fort had one barrack room that could sleep only 50 men, but an unusually big granary, not easily understandable at first.  It made the purpose of this fort potentially different to the first – either a nerve centre for troops outstationed locally, or a supply and control centre, or a stop off for messengers and officers, or a store for food taxes gathered from the locals.  By 120 AD you would see a vicus built around the south side of the fort and that the road was diverted in some way around to the north.  Although this begins to feel like we’re in a lively and bustling place, like Uppermill on a dress-up day, another few years saw it sadly abandoned, c.125 AD.

The next thing we ‘know’ it’s the Viking era – and we get there via the brilliant Thomas Percival, writing in 1752.  He did a landscape-type survey of the area and I can’t resist giving you his words in full about the truly enigmatic story of Knott Hill.  Here they are:

“I mention’d Knothill to be a Roman tumulus.  The people about Castleshaw have yet a tradition, that some great man belonging to the castle was buried there, and have a confused notion of a march of an army of Danes.  Now as Canutus marched into Yorkshire out of Lancashire, it is highly probable, that he came over this road: and as Knott-hill gave him a full view of the Yorkshire moors, it was a proper place and opportunity to harangue his men: and that speech might alter the old name of the tumulus to Knot-hill, if it was not made for his use, which, I think, it was not. Several names of places on this road seem to carry his memory in their names.  Knothill here; Knotty-lane just below; Knotlanes between here and Manchester, very near the Roman highway; Knottmills near Manchester; and Knutsford in Cheshire, which way he probably came, in his march from Staffordshire.” (Percival 1752: 230)

So were King Cnut and the Vikings at Castleshaw?  Why not.

Percival says “At Castleshaw I was well pleased to find a double Roman camp” and so, for me, should anyone be who goes there.

And nothing more can be said from sources until we reach the late 19th century and step into 115 years or so of the age of archaeology at Castleshaw.  Of which more in a few days.

Last week HLF gave us permission to make public our news! Yes, they’ve given us a great grant to run the project that we’ve been on and on about …. a year long plan to excavate at Castleshaw Roman Forts in Saddleworth.

And this is how the Castleshaw site looks from the air…. 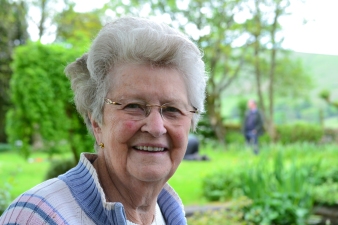 …with diggers Cliff and Maurice going for it…. 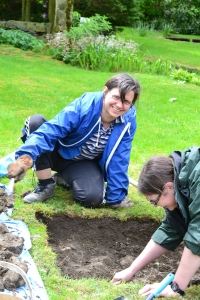 then Norman giving it a good pickaxe-ing 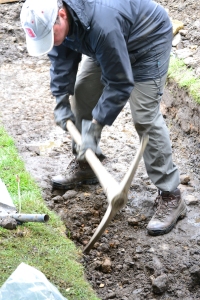 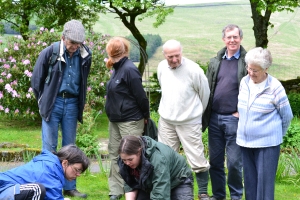 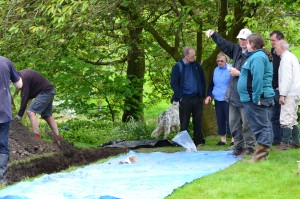 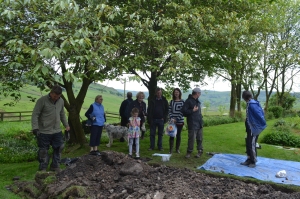 the sad news from our illustrious leader Norman is that

But here, just to keep our spirits up, is a pic of some of us

standing on an actual ROMAN ROAD, no really – it is.  Later I’ll bring you a fuller report of this weekend’s work from Norman.

And in the weeks ahead, when we’re doing no digging, I’ll backtrack through our blogstory taking us right up to the start of the community dig in July.